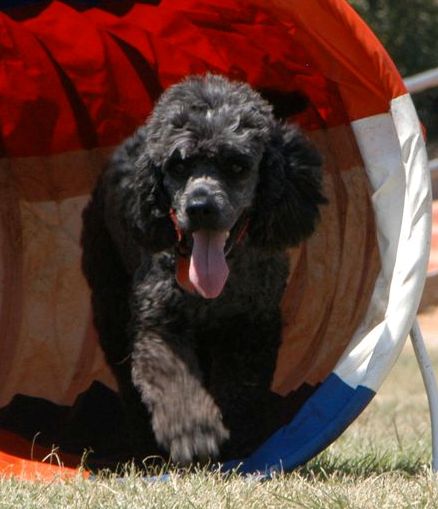 My blog is moving

Hi...from now on I will be publishing on Wordpress. Not that Blogger is bad, it's just that I will join the other two blogs that Ms. Linda writes, Yips and Howls, and English with Linda.

So, if you are subscribed here, head over there and resubscribe so you won't miss any of my posts.

Pepper
Posted by Pepper the Poodle at 12:12 PM No comments:

Please note...all is back to normal

Hmmmpphhh and double bah!...I wasn't wrong last post (Jan 9th!). Things were underway. Awful, horrible things, namely that my Mom went away for more than TWO weeks, and I was left in the care of the two kids. OY!

Well, I did get food, and water, and a walk now and again (not very long ones, though). But brushing...forget it. And neither did Honey, and the fur-bunny clumps were rampant. I did miss my mom.

Jubilation, when she returned last Monday night (i.e. Jan 24). I knew something was up when they put the two of us in the car. Last year it was the same! We got to go to the airport to pick her up. Silly Oded tried to hitch us up with our seat belts, but put mine on Honey and Honey's on me. So she was kind of squished into it, and I fell out of mine. Luckily...no sudden stops or anything.

I can't tell you how happy we were to see Mom back. I licked her 362 times! (One lick for every hour she was gone.) She sat in the back of the car with us and scratched behind our ears and I was so happy I cried.

She started right in the next day brushing us. Honey had a garbage-can-full hairs brushed out of her coat. I had some mats starting on my back and some knots on my legs, and that wasn't much fun, but I got a scissor trim to my legs and top-knot and that helped things a bit. She also said I got fatter. Hmph. So now I am on a diet. This is not fun.

On Friday we got in the car and I thought we were going to agility, but they only had an obedience class. Something about having no one willing to drag the trailer up the hill at the end of the day (Linda said she will drag it down). Maybe they should hitch all the dogs together. We could pull it.  But the obedience lessons were fun too, but not as much fun as jumping and climbing over things. Hope that this problem gets solved asap.


OK, you may ask. If she's been back since last Monday, why haven't I posted anything since? Well, this is because she has been spending every moment at the computer either catching up with work, or posting to her own blog and putting on it zillions of pictures she took while away. Who cares? Not even one pic of another dog. Blah.


So this morning, she finally, finally, let me get my paws on the computer and say hi! again to all of you.
Well, just to let you all know that I am back in the office chair again!
Posted by Pepper the Poodle at 8:22 AM No comments:

Uh oh...something's going on, and I have a feeling it isn't something I'm going to like. Last night some suitcases came out of storage and Linda and the mister are putting clothes in them. I have an awful feeling. Last year something like this happened and Linda was gone for ages.

Today we went for a walk, and she said how much she was going to miss me and Honey.

Definitely not to my liking.

And these days it is so cold; who am I going to cuddle under the blankets with? And I hope the kids don't forget to feed me (not that I couldn't use to lose a bit of blubber), or walk me or play with me.

Clicked into a Grooming Session

I have to admit it. I hate begin brushed. I am not used to it, and if I must be perfectly honest, I don't get used to it because it doesn't get done often enough.

And I guess part of the reason why it doesn't get done often enough is the frustration Linda has when she brushes me and I am always resisting. And pulling my paws away, and trying to nip her hand or the brush. It's a struggle. I know I look really handsome when my hair is all nice and fluffy, but I just can't stand having my legs touched.

Today she got me! She sat me down on the sofa with her, and got out that stupid slicker brush again. But, lo and behold, that cup of treats that she uses for clicker training came out too! I didn't see any clicker though. No, today there was no "real" clicker. She used a word marker "YAS" and treated. Yas, treat, yas, treat. I got it!

By the time the timer rang, I had had a swift brushing all over, including my tail, and I didn't struggle once.

After she was done with me, she did the same with Honey (you wouldn't believe the fur that comes out of that dog.) And when the timer went off...guess who jumped up onto the sofa for another round of grooming? Yay me. I tell you, this clicker business is the greatest.

I was going to add a picture of Honey and her hair...but the "add picture" thingie isn't working.
Later.
Posted by Pepper the Poodle at 7:39 PM No comments:

I Passed My First Agility Trial - and I Celebrate!

Last Friday I ran my first agility trial, despite Linda's thinking that perhaps I wasn't ready. Well, what does she know. I passed! My first try! Yay me.

My final score was only 10 points off: 5 off for not touching the white contact on the A-frame, and 5 off for stopping to investigate some delicious smell in the middle of the field. That's a "Very Good" score. Yay me!

Unfortunately, no one filmed my historic run.

The next day I decided to celebrate, so during the long walk we took, I found a really delicious pile of poop and had a good roll in it. Delightful!

Unfortunately, there is definitely something wrong with how humans appreciate vintage poop. I get home and get marched right up to the bathtub.

Now I smell like passion fruit and mango. Now THAT's "yuck"!!!
Posted by Pepper the Poodle at 5:41 AM 2 comments:

Winter has hit like the proverbial lion. It is cold and windy today, and I am happy to say that I am warm and cozy in my dog sweater. Honey doesn't need a sweater, as she has tons of fur. But I get shaved regularly, and, to tell you the truth...I am cold! 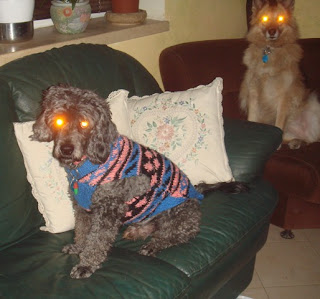 Because of the weather, agility was canceled on Friday, which was unfortunate, because I was scheduled to do my first agility trial. Now I will have to wait for another time.

In the Beginning, Part 2.

Today was a  nice lazy day. Yesterday, of course, was the agility group, which I love, and I had a great time. Linda brought with "Profiteroles" for the group to celebrate the success of my obedience test the week before.

We came home exhausted, especially Linda, who could barely stay awake for dinner, and then fell asleep on the sofa!

Today my friend, Minnie, came over with Tamar, and we all went to the field for a nice run. I also rolled in the dirt -- such fun. Just too bad it wasn't really stinky. I love stinky!


Anyways, today I will tell you how it ended up that I am still at this house.

As you may recall, I was found in Feb. 2008, and Linda promised her husband that, like three other little black dogs that she had found before, she would find me another home too. And she really thought she would. Little did she know, that I had a PLAN.

My plan was to be so damn cute, that she would not be able to let me go. First of all, I showed her how smart I was, and how I could learn stuff really quickly.

Second, I made sure that I was really entertaining! The thing that really amused her was that I would take a ball in my mouth, throw it, and then run after it and catch it. I am a self-entertaining dog! I could tell she was enchanted. Also many people told her how cute I am, and asked how she could possible give me up?

(I know this video doesn't look very impressive, but you can get the idea.)


I knew my PLAN had worked when some people actually took an interest in taking me...but she told them she would think about it. Mwahahah!

So now we had to convince HIM! Her husband was,back, it's already March, and he's starting to bug her about "How long is it taking you to find a home for that dog?" He's sitting with Linda on the couch, and  I get the tennis ball and do that throw-catch-throw catch thing. And then she starts about...having two dogs isn't much more work than one, it's company for Honey, he's so cute...and before you know it, we have convinced him that I was to stay! Yipeeeee!!!

Once that was decided, though, it was time to do the formal adoption. So off we went to the vet. Before you know it I had gained a microchip, and lost some private parts (I won't go into that...!) I also got stuck with needles against rabies, distemper, parvo and whatever else they think might get me! They named me "Pepper" because I am so full of pep and verve...and it's a nice condiment alongside "Honey."

And that is how I became a part of the family.

See you all again,

Pepper
Posted by Pepper the Poodle at 9:42 PM No comments:

Commands and Tricks I Know